The economic data reports were on the strong side of expectations, boosting the major stock market averages. Bond yields fell, presumably due to expectations of increased demand from Japan and short-covering (with many having positioned for higher yields).

The Fed’s Beige Book noted that “national economic activity accelerated to a moderate pace from late February to early April” (vs. “a modest pace” in the previous assessment). Hiring remained “a widespread challenge, particularly for low-wage or hourly workers, restraining job growth in some cases.” Input costs rose “across the board.” Selling prices also increased, “but typically not on pace with rising costs.”

The Consumer Price Index rose 0.6% in March (+2.6%), mostly reflecting “base effects” (a rebound from depressed figures from a year ago). The report on import prices showed further upward pressure in industrial supplies and materials (+29.5% y/y), but inflation in imported finished goods (capital goods, autos, consumer goods) remains moderate. Retail sales jumped 9.8% in March (+27.7% y/y), partly reflecting a rebound from bad weather. Manufacturing output (+2.8%) and single-family building permits (+4.6%) were strong in March, but both failed to fully offset weather-related weakness in February. Jobless claims fell by 193,000, to 576,000, in the week ending April 10, trending down, but still high by pre-pandemic standards.

Next week, the economic calendar is light. Home sales should rebound from February’s poor weather. The LEI should be up about 1.2%. 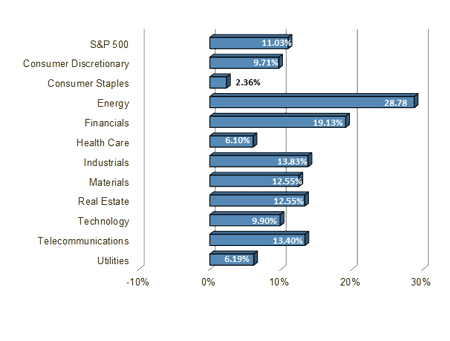 All expressions of opinion reflect the judgment of the Research Department of Raymond James & Associates, Inc. and are subject to change. There is no assurance any of the forecasts mentioned will occur or that any trends mentioned will continue in the future. Investing involves risks including the possible loss of capital. Past performance is not a guarantee of future results. International investing is subject to additional risks such as currency fluctuations, different financial accounting standards by country, and possible political and economic risks, which may be greater in emerging markets. While interest on municipal bonds is generally exempt from federal income tax, it may be subject to the federal alternative minimum tax, and state or local taxes. In addition, certain municipal bonds (such as Build America Bonds) are issued without a federal tax exemption, which subjects the related interest income to federal income tax. Municipal bonds may be subject to capital gains taxes if sold or redeemed at a profit. Taxable Equivalent Yield (TEY) assumes a 35% tax rate.The Dow Jones Industrial Average is an unmanaged index of 30 widely held stocks. The NASDAQ Composite Index is an unmanaged index of all common stocks listed on the NASDAQ National Stock Market. The S&P 500 is an unmanaged index of 500 widely held stocks. The MSCI EAFE (Europe, Australia, Far East) index is an unmanaged index that is generally considered representative of the international stock market. The Russell 2000 index is an unmanaged index of small cap securities which generally involve greater risks. An investment cannot be made directly in these indexes. The performance noted does not include fees or charges, which would reduce an investor's returns. U.S. government bonds and treasury bills are guaranteed by the US government and, if held to maturity, offer a fixed rate of return and guaranteed principal value. U.S. government bonds are issued and guaranteed as to the timely payment of principal and interest by the federal government. Treasury bills are certificates reflecting short-term (less than one year) obligations of the U.S. government.Commodities trading is generally considered speculative because of the significant potential for investment loss. Markets for commodities are likely to be volatile and there may be sharp price fluctuations even during periods when prices overall are rising. Specific sector investing can be subject to different and greater risks than more diversified investments. Gross Domestic Product (GDP) is the annual total market value of all final goods and services produced domestically by the U.S. The federal funds rate (“Fed Funds”) is the interest rate at which banks and credit unions lend reserve balances to other depository institutions overnight. The prime rate is the underlying index for most credit cards, home equity loans and lines of credit, auto loans, and personal loans. Material prepared by Raymond James for use by financial advisors. Data source: Bloomberg, as of close of business April 15, 2021.