The June consumer price index (CPI) report wasn’t what the doctors were recommending. But it wasn’t the top number, or headline inflation, that is moving markets and potentially the Fed. Everybody knew that oil and gasoline prices were going to have an outsized impact on the number and that was the reason for consensus expectations at 1.1% for the month. The problem was that the core consumer price index (Core CPI) was up by 0.7% versus 0.6% in May. And this means that not only are energy and food prices moving higher, but also the rest of the sectors of the US economy, with commodities (excluding food and energy commodities) prices increasing by 0.8%, new vehicles prices increasing 0.7%, used cars and trucks prices surging 1.6% once again, apparel prices increasing 0.8%, shelter prices up 0.6%, transportation services prices surging 2.1% and medical care services prices increasing 0.7%.

That is, if the Fed goes with an increase of 100 bps during the July meeting, the federal funds rate will be at 2.50% to 2.75% in July, which is borderline restrictive if we assume that the neutral federal funds rate is about 2.25% to 2.50%.

At this time we are inclined to say that the Fed is going to go for a 75 basis point hike because although retail sales were stronger than consensus, consumer demand was very weak in Q2. Meanwhile industrial production was also very weak at the end of the second quarter. So, the Fed will have lots of evidence to justify 75 basis points rather than 100 basis points. On top of this, five-year ahead inflationary expectations from the preliminary University of Michigan Index came in at 2.8%, which means that long-term inflation expectations remain anchored.

Inflation is Going to Slow Down

We know, and the Fed knows, that inflation is going to slow down in the near term because oil prices, and thus, gasoline prices, are down considerably in July compared to June. So, the top line CPI number is going to be lower in July compared to June. The year-on-year measure, on the other hand, is more difficult to predict, and will depend on what happens to core prices. If core prices continue to increase at current rates, the year-over-year rate may not come down too much depending on how strong the core rate is.

If the economy was in recession already, as many argue today, the Fed should not worry so much, as core prices are going to come down because American consumers will have no money to continue to buy these goods. But the economy is not in recession (even if second quarter GDP comes out negative) and if gasoline prices are coming down considerably in July, American consumers are going to spend less on gasoline but will probably use those savings to buy other goods and services, which could keep the core rate higher than what markets are expecting. However, as we said above, consumer demand has weakened considerably and thus will help keep prices contained in the coming months.

It Is Not The Fed’s First Rodeo 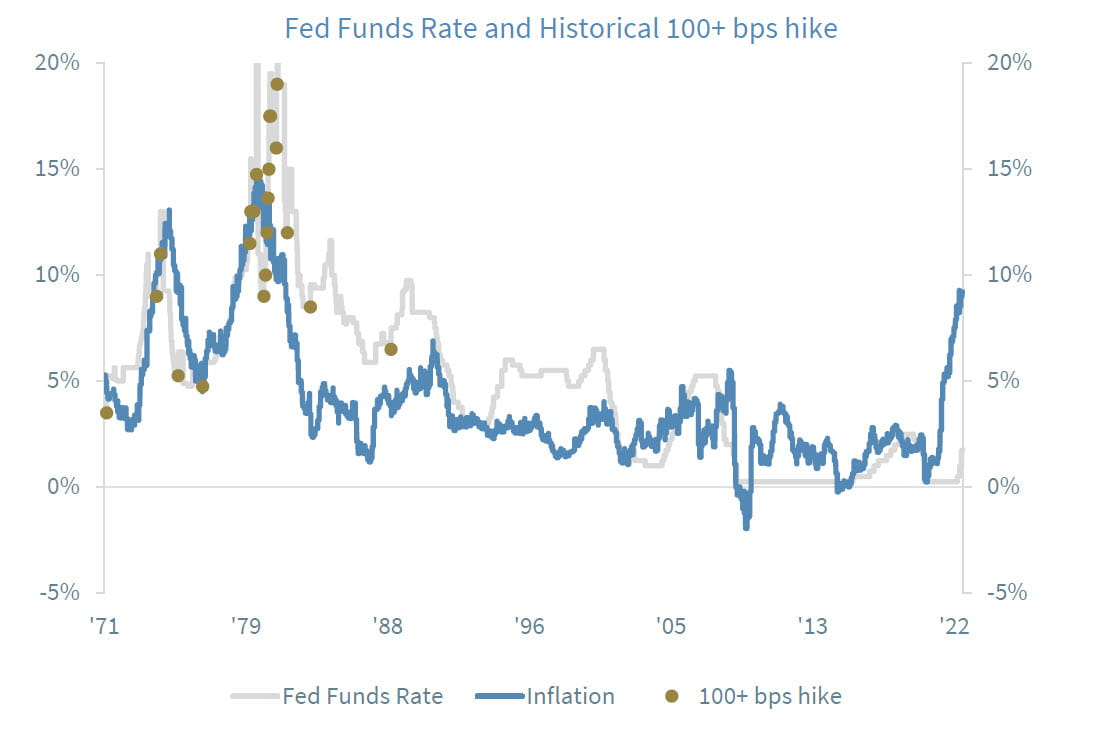 The only other time in history that saw a triple digit increase in a short period of time was in the 1980s during the Volcker era. At that time, the federal funds rate increased from 9% in August of 1980 to 19.5% in December of that same year. However, the US economy back then was facing both high inflation and very slow growth, also known as ‘stagflation.’ Today, that’s not the case. While US inflation is at a 40-year high, the economy is slowing but still above potential output despite GDP numbers in Q1 and perhaps in Q2 suggesting otherwise.