Extreme criticism of the Federal Reserve (Fed) over the last year and a half has put Fed officials on the defensive, which means that it went from a highly benign view of inflation (i.e., it is transitory, and we can wait) to a very risk averse stance, which is where we find it today.

This is what we got from the Fed’s statement after the Federal Open Market Committee (FOMC) meeting on Wednesday as well as from the press conference given by the Fed Chairman, Jerome Powell. The pendulum has shifted so much that it is purposefully disregarding the better news on inflation we have gotten over the last several months and seems to be willing to overdo its play in terms of monetary policy today. And markets have reacted accordingly after becoming more upbeat in the last couple of months with what they thought was good news and advances on the inflation front.

This section from the Fed’s statement gives a clear view of its current extreme risk aversion stance:

This year the Fed had one such event: Russia’s invasion of Ukraine and the ensuing war, which sent oil and food prices through the roof and pushed it into the current risk aversion stance. And since almost all petroleum forecasts we have seen lately call for prices of petroleum to go back to $100 or higher, it is clear that the Fed is trying to be ahead of the curve in case this forecast comes to fruition and pushes inflation higher once again.

For this reason, we are including our ‘inflation heatmap’ in this report so we can see the different inflation paths and the time we will need for the Fed to attain the 2.0% inflation target going forward. Remember that these are very simple scenarios that assume that inflation changes at a constant rate per month in order to observe what would happen to the year-over-year rate of inflation for both the consumer price index (CPI) and the personal consumption expenditures (PCE) price index, which is the favored inflation number targeted by the Fed.

By looking at this ‘inflation heatmap’ it is clear that what markets are expecting – for the Fed to pivot before the end of 2023 – is akin to expecting several monthly deflationary (i.e., negative rates of inflation) readings for both the CPI as well as the PCE price index. Although this is not impossible, it is very unlikely as things stand today. And the reason has to do with, as we indicated above, the possibility for oil prices to, once again, cross the $100 dollar per barrel threshold. 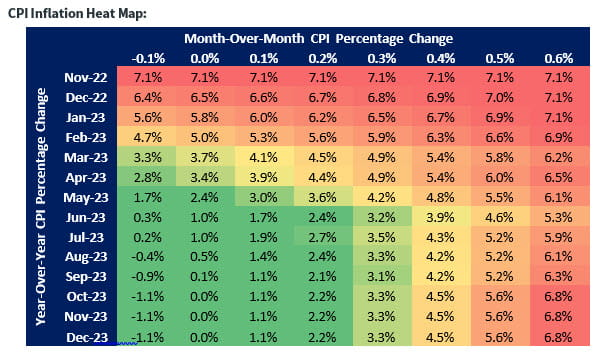 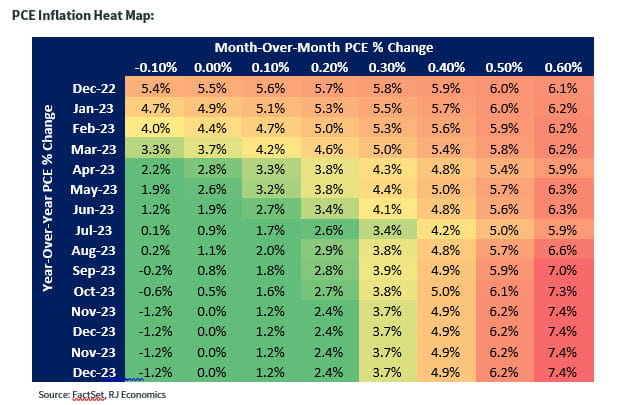 Being at the Fed is probably a very rewarding job in good times, i.e., low inflation and low unemployment, but it is probably very stressful when those two measures are not where everyone expects them to be because the Fed’s mandate states that it is responsible for both of these measures to be low at the same time, which is a very difficult feat in normal times, let along during and after a pandemic such as we experienced in 2020.

But just by looking at the savings rate today, it is clear that interest rates on savings are still not creating the incentives for Americans to save more today. So, what is the alternative to not saving? To continue to consume. Thus, Americans have continued to consume, even if they have to go into debt to do so. 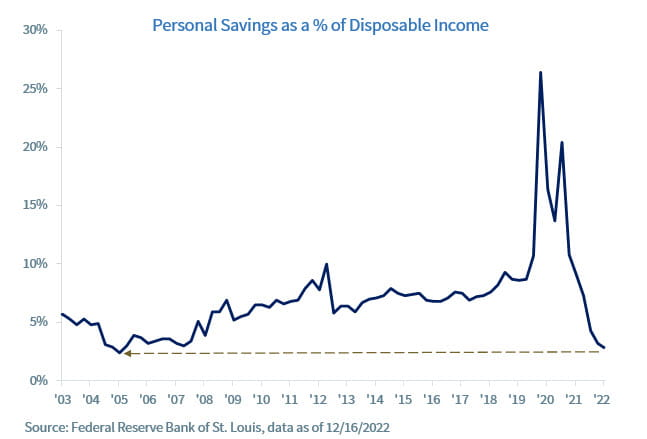 This means that the Fed is between a rock and a hard place. It wants to slow down the economy, but the economy is not responding. The goods producing sector is weak, and that is the result of higher interest rates as well as the appreciation of the U.S. dollar. Higher interest rates have slowed the housing market while the appreciation of the U.S. dollar has started to affect exports to the rest of the world. But the goods sector is not tanking, it is, so far, slowing down. However, the service sector is still booming, and it seems it does not care about higher interest rates, at least not yet. 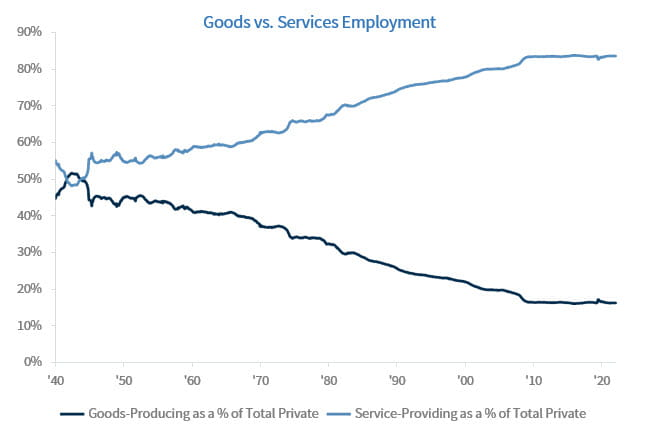 So, the only recourse the Fed has today is to ‘scare’ companies that a recession is coming so they start to dial back in terms of employment today as well as employment projections for the coming months. In ‘Fed speak’ this is what it calls ‘guidance.’ Since the Fed has no other way of pushing companies to slowdown or even shred employment, it is letting them know that it is going to be even tougher than it has been in the past in order to make companies change their expectations about the future. That is, they are trying to change expectations in order to affect what John Maynard Keynes called ‘animal spirits’

According to investopedia.com: “Animal spirits represent the emotions of confidence, hope, fear, and pessimism that can affect financial decision-making, which in turn can fuel or hamper economic growth. If spirits are low, then confidence levels will be low, which will drive down a promising market—even if the market or economy fundamentals are strong. Likewise, if spirits are high, confidence among participants in the economy will be high, and market prices will soar.”

So, this is where we are today. The Fed is trying to ‘scare the bejesus’ out of the financial markets as well as other economic actors like firms and consumers, so the economy goes into recession. However, firms, but particularly small firms, are saying: why would we not keep increasing employment if we are still understaffed for the amount of business we have today? Meanwhile, consumers argue that since interest rates on savings are so low, they will continue to consume even if they have to continue to borrow because, so far, employment is very strong, and we expect to pay back these debts in the future.