The October Employment Report – Recent data reports have been consistent with a further rebound in economic activity, but we still have a long way to get back to where we were before the pandemic and the pace of improvement has moderated. While attention has been focused on the election and the implications for fiscal policy, the daily number of COVID-19 cases has surged. There is a tradeoff between economic growth and fighting the virus.

Nonfarm payrolls rose by 638,000 in the initial estimate for October, held back by the loss of 114,000 temporary census workers and by a smaller (unadjusted) gain in education jobs. Normally that kind of headline job growth would be outstanding, but the October gain still leaves us down more than 10 million jobs from February. Private-sector job growth was broad-based last month (up 906,000 overall), with strength in construction (+84,000), manufacturing (+38,000), and retail (+103,700) – although each was lower than in February. Leisure and hospitality bounced back further (up 271,000 in October, mostly in restaurants), but was still down 20.7% from a year ago. A few sectors have exceed pre-pandemic employment, such as grocery stores, home improvement stores, online shopping, and delivery services, but these are very small gains relative to the overall job market.

Growth has been stronger than was expected earlier, largely because state and local economies have opened up more than anticipated. While government directives have relaxed, so has vigilance against the virus. No surprise, the number of COVID-19 cases has surged in the last few weeks (the number of cases largely reflects behavior that occurred two weeks prior). The rise in cases has been more pronounced in areas that had dodged the virus earlier, particularly in rural areas, which are now struggling to deal with the fallout.

It still seems unlikely that we will see the kind of severe lockdowns that occurred in March and April, although some areas may require that. Most individuals would respond by being more careful, using greater vigilance, and avoiding large crowds, but some won’t – and the virus will continue to spread.

The economy should continue to recover, but the pace will still depend on the virus and efforts to contain it.

Financial market participants view divided government favorable, but Washington will have to work together to accomplish things. Responding to a pandemic ought to be something where the two sides can come together.

The October Employment Report was consistent with a further recovery the economy, although the pace of improvement has moderated. Nonfarm payrolls rose by 638,000 in the initial estimate for October, restrained by a loss of temporary census workers and fewer teachers. Private-sector payrolls advanced by 906,000, with strength in manufacturing, construction, and retail, plus a further recovery in restaurant jobs. However, payrolls remained more than 10 million lower (-6.6%) than in February.

Across all major categories, payrolls remained lower than in February: 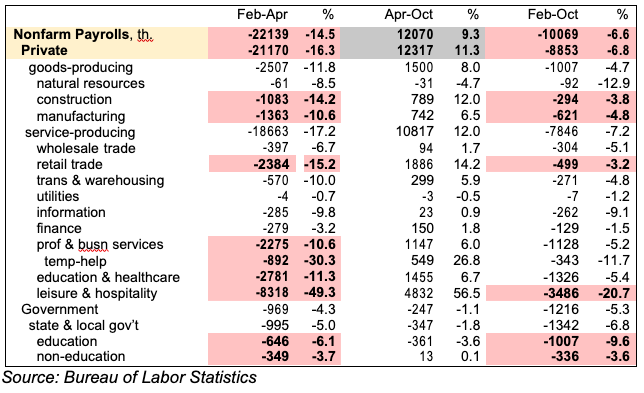 The Federal Open Market Committee left short-term interest rates unchanged (the target range for federal funds at 0-0.25, the Interest on Excess Reserves rate at 0.10%) and did not alter its monthly asset purchases plans ($120 billion per month--$80 billion per month of Treasuries and $40 billion per month of agency MBS). In his press conference, Fed Chair Powell noted that, “it will take a while to get back to the levels of economic activity and employment that prevailed at the beginning of this year, and it may take continued support from both monetary and fiscal policy to achieve that.” However, in Q&A he said it was not his job to advise Congress on the timing or magnitude of additional fiscal stimulus.

Chair Powell: “As we have emphasized throughout the pandemic, the outlook for the economy is extraordinarily uncertain and will depend in large part on the success of efforts to keep the virus in check. The recent rise in new COVID-19 cases, both here in the United States and abroad, is particularly concerning. All of us have a role to play in our nation’s response to the pandemic. Following the advice of public health professionals to keep appropriate social distances and to wear masks in public will help get the economy back to full strength. A full economic recovery is unlikely until people are confident that it is safe to reengage in a broad range of activities.”

The ISM Manufacturing Index was stronger than expected in October, with somewhat stronger growth in new orders and production. Employment moved above the breakeven level for the first time since July 2019. The ISM Services Index edged lower (to 56.6, vs. 57.8 in September), consistent with further improvement in the overall economy. Comments from supply managers in both reports were mixed, but generally positive, with ongoing concerns about the pandemic.

Unit motor vehicle sales edged down to a 16.2 million seasonally adjusted annual rate in October, vs. 16.3 million in September. Softer consumer demand was offset by improvement in fleet sales to car rental companies.

The U.S. trade deficit narrowed to $63.9 billion in September, down from a record $67.0 billion in August (it was $47.8 billion a year ago). Exports fell more than imports in the early months of the pandemic and have rebound more slowly as the economy has recovered. Petroleum imports fell 38.6% year-over-year, which non-petroleum merchandise imports rose 0.6%. Merchandise exports are down 9.8% from a year ago. The surplus in services has fallen from $24.3 billion at the end of last year, to $16.8 billion in September.

Jobless claims, a leading economic indicator, were little changed at 751,000 in the week ending October 31. The four-week average was 787,000 – still an extremely high trend (although less horrific than in March and April). Continuing claims (for regular state unemployment insurance programs), a coincident economic indicator, fell by 538,000 (week ending October 24) to 7,285,000. It’s unclear whether the downtrend in claims is due to people finding work or whether they have exhausted their benefits.

The New York Fed’s Weekly Economic Index rose to -3.12% for the week of October 31, up from -3.52% a week earlier (revised from -3.32%) and a low of -11.45% at the end of April, consistent with a moderation in the pace of the recovery. The WEI is scaled to four-quarter GDP growth (for example, if the WEI reads -2% and the current level of the WEI persists for an entire quarter, we would expect, on average, GDP that quarter to be 2% lower than a year previously). Note that the weekly figures are subject to revision.

The University of Michigan’s Consumer Sentiment Index was little changed at 81.8 in the full-month assessment for October (the survey covered September 30 to October 28), vs. 81.2 at mid-month and 80.4 in September. The report noted that shifts in political perceptions had offsetting impacts over the last few months (“compared with three months ago, the Expectations Index rose by 50% among Democrats but just 7% among Republicans”).

The opinions offered by Dr. Brown should be considered a part of your overall decision-making process. For more information about this report – to discuss how this outlook may affect your personal situation and/or to learn how this insight may be incorporated into your investment strategy – please contact your financial advisor or use the convenient Office Locator to find our office(s) nearest you today.

All expressions of opinion reflect the judgment of the Research Department of Raymond James & Associates (RJA) at this date and are subject to change. Information has been obtained from sources considered reliable, but we do not guarantee that the foregoing report is accurate or complete. Other departments of RJA may have information which is not available to the Research Department about companies mentioned in this report. RJA or its affiliates may execute transactions in the securities mentioned in this report which may not be consistent with the report's conclusions. RJA may perform investment banking or other services for, or solicit investment banking business from, any company mentioned in this report. For institutional clients of the European Economic Area (EEA): This document (and any attachments or exhibits hereto) is intended only for EEA Institutional Clients or others to whom it may lawfully be submitted. There is no assurance that any of the trends mentioned will continue in the future. Past performance is not indicative of future results.