The November Employment Reports was a bit disappointing. Nonfarm payrolls rose by 245,000 (vs. a median forecast of 485,000). The increase was held back by the loss of 93,000 temporary census workers. State and local government continued to shed workers. Seasonal hiring was much lower this year, which showed up as a decline in adjusted retail jobs. The pace of improvement in the labor market has continued to slow following a sharp pickup in the late spring and summer. The current surge in COVID-19 cases is leading some states government to re-impose restrictions on in-person services, but self-isolation for individuals with health concerns is expected to restrain the recovery into early 2021. The arrival of vaccines should help to boost economic growth and the job market in the second half of the year.

Private-sector payrolls rose by 344,000 in the initial estimate for November, the smallest increase since the recovery in jobs began. The economy added 302,100 retail jobs before seasonal adjustment, compared to 431,900 a year ago. That worked out to a 34,700 decline after seasonal adjustment. Less seasonal hiring should lead to fewer seasonal layoffs in January, adding to that month’s adjusted gain. Weakness in retail hiring was partly offset by gains in supplier deliveries and warehousing in November.

State and local government jobs fell by 13,000, down 1.3 million from February (before the pandemic). Weaker economic growth has reduced tax revenues, adding to budget pressures. State and local government subtracted 0.6 percentage point from GDP growth in the first five years of the recovery from the 2008-09 financial crisis according to Jason Furman, who served as chair of President Obama’s Council of Economic Advisors. Federal support to state and local governments is badly needed, but even with such aid, we would still likely see a restraint on the economic recovery in 2021.

The unemployment rate fell to 6.6% in November, down from 6.9% in October. However, labor force participation remains well below the pre- pandemic level (61.5%, vs. 63.4% in February). If labor force growth had continued at its pre-pandemic trend (+0.5% per year), the unemployment rate would be closer to 9.4% (up from 9.3% in October, but down from 19.0% in April). Temporary layoffs continue to transition to permanent layoffs. The long-term unemployed face increased hardship, as many benefits will expire at the end of this month.

The current surge in COVID-19 cases will limit the recovery in consumer services into early 2021, but the arrival of vaccines should lead to better improvement in the second half of 2021. For high-wage workers, more able to work from home, the job recovery has been largely V-shaped. For low-wage workers, mostly in service industries, the job market remains depressed. Mid- and upper-income households experienced a sharp rise in savings during the pandemic. That should help to fuel the rebound in consumer services in the second half of next year

In the meantime, we need Congress to act on support for laid-off workers, small businesses, and state and local governments

The November Employment Report showed a further moderation in the pace of job growth.

Across all major categories, payrolls remained lower than in February. There have been gains in a few of the narrower categories (building materials and garden supplies +7.4% from February, grocery stores +2.0%, couriers and messengers +21.5%, warehousing and storage +6.0%, scientific research and development +2.4%). 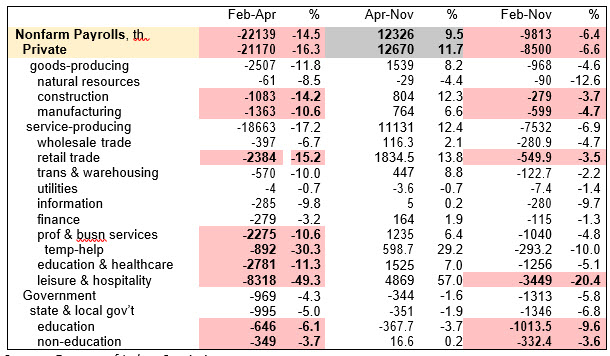 The Fed Beige Book described the economic expansion as “modest to moderate in most areas of the country. Banking contacts reported some deterioration of loan portfolios, particularly for commercial lending into the retail and leisure and hospitality sectors. An increase in delinquencies in 2021 is more widely anticipated. Employment rose, “but for most, the pace was slow, at best, and the recovery remained incomplete.” Firms that were hiring continued to report difficulties in attracting and retaining workers.

The ISM Manufacturing Index fell to 57.5 in November, from 59.3 in October, reflecting continued strength in new orders and production. The employment gauge fell below the breakeven, as firms reported COVID-19 disruptions and difficulties in finding skilled labor. The ISM Non-Manufacturing Index edged down to 55.9 in November, from 56.6 in October. Business activity and new orders remained strong, but a bit slower. Both reports noted pandemic-related increases in input costs and concerns about the surge in COVID-19 cases.

Unit Motor Vehicle sales fell to a 15.6 million seasonally adjusted annual rate in November, down from 16.3 million in October and 17.0 million a year ago.

Economic data released during the Thanksgiving week suggested a stronger pace of growth than expected into early 4Q20. Real GDP fell at a 33.1% annual rate in the 2nd estimate for 3Q20, the same as in the advance estimate, with minor revisions to the components. Personal income fell 0.7% in October (+5.5% y/y), reflect a decrease in pandemic assistance, but private-sector wages and salaries rose 1.0% (+2.9% y/y). Personal spending rose 0.5% (-0.6% y/y), down 1.6% from February. Spending on consumer durables was up 15.2% from February (before the pandemic), while spending on services is still down 5.8%.

The PCE Price Index, the Fed’s chief inflation gauge, was unchanged in October (overall and excluding food and energy). The core CPI rose 1.4% from a year earlier, well below the Fed’s 2% target.

Minutes from the November 4-5 policy meeting (released November 25) showed that officials were concerned about the surge in COVID-19 vases. Officials discussed asset purchases (likely to taper at some point), noting that the committee “might want to enhance its guidance for asset purchases fairly soon.”

The New York Fed’s Weekly Economic Index edged up to -2.31% for the week of November 28, up from -2.87% a week earlier (revised from -2.68%) and a low of -11.45% at the end of April, consistent with a moderate pace of growth in the near term. The WEI is scaled to four-quarter GDP growth (for example, if the WEI reads -2% and the current level of the WEI persists for an entire quarter, we would expect, on average, GDP that quarter to be 2% lower than a year previously). Note that the weekly figures are subject to revision.

Jobless claims, a leading economic indicator, fell to 712,000 in the week ending November 28, down from the previous week’s total of 787,000.  Figures tend to be choppy around Thanksgiving.  The four-week average  was 739,500 – still elevated. The General Accounting Office noted that the claims figures are exaggerated due to multiple fillings. Continuing claims (for regular state unemployment insurance programs) fell by 569,000 (week ending November 21) to 5,520,000.

The University of Michigan’s Consumer Sentiment Index fell to 76.9 in the full-month assessment for November (the survey covered October 30 to November 21), vs. 77.0 at mid-month and 81.8 in October. The report noted that the November data were less optimistic than last month due to the resurgence in COVID-19 infections and deaths as well as partisan shifts due to the outcome of the presidential election.

The opinions offered by Dr. Brown are provided as of the date above and subject to change. For more information about this report – to discuss how this outlook may affect your personal situation and/or to learn how this insight may be incorporated into your investment strategy – please contact your financial advisor or use the convenient Office Locator to find our office(s) nearest you today.

This material is being provided for informational purposes only. Any information should not be deemed a recommendation to buy, hold or sell any security. Certain information has been obtained from third-party sources we consider reliable, but we do not guarantee that such information is accurate or complete. This report is not a complete description of the securities, markets, or developments referred to in this material and does not include all available data necessary for making an investment decision. Prior to making an investment decision, please consult with your financial advisor about your individual situation. Investing involves risk and you may incur a profit or loss regardless of strategy selected. There is no guarantee that the statements, opinions or forecasts provided herein will prove to be correct.