What has happened to the Federal Reserve’s (Fed) transparency? For us, the Fed’s press release after the Federal Open Market Committee (FOMC) meeting on November 2, 2022, was a welcome and positive spin on how the Fed is looking at its role going forward. This was a relatively ‘dovish’ press release, and markets reacted appropriately to it. The most important line in the release was: “In determining the pace of future increases in the target range, the Committee will take into account the cumulative tightening of monetary policy, the lags with which monetary policy affects economic activity and inflation, and economic and financial developments.”

However, during the press conference, Chairman Powell walked it all back and let the bears take the win, punting at every question from reporters and painting a very hawkish view of the economy and what the Fed is expected to do going forward, sending the market plunging again.

Granted, inflation remains stubbornly high and the next inflation readings are expected to produce a lot of noise due to the recent increase in gasoline prices, even though we expect the year-over-year rate of inflation to continue to come down, slowly but surely. Furthermore, the Fed is probably very concerned that any potential new shock to prices could further deteriorate the inflation picture.

But what the Fed Chair had to say during the press conference was not all bad and it seems that few caught some very positive comments from the Fed Chair. This commentary was related to a reporter’s question regarding whether the Fed thought that inflationary pressures were coming from the tightness of the labor market. His answer was no, that the Fed did not see wages and salary pressures as the determinants of the current inflationary environment. However, he paused and said, however, we don’t want to wait and give a chance that higher wages and salaries could become an issue for inflation going forward.

This is positive because even if he was very hawkish with his commentaries, the hawkishness did not translate into ‘we have to engineer a deep recession in order to bring employment down so wages and salaries no longer contribute to inflation going forward.’’

This is the reason why even though the Fed is going to continue to increase interest rates, perhaps to a terminal rate of 5.0% for now, it will be very cautious not to overtighten and kill one of the few things that is going well for Americans: employment.

The Impact of the Economic Environment on Midterm Elections

Voters are heading to the polls next week, and the health of the economy, but especially that of their own wallets, is likely to influence their decisions when it comes to which candidates they’ll choose. The U.S. economy rebounded in the third quarter, growing by an annualized rate of 2.6%, even though the underlying details still showed a weakening economy (see Weekly Economics for October 28, 2022).

Although most consumers have felt the impact of higher prices, they have continued to buy goods and services, which is reflected in the decline of saving as a percentage of disposable personal income. Furthermore, credit card balances have continued to increase as individuals continue to experience a tight labor market and feel that they can stretch consumption by going into credit card debt. While these data seems concerning for consumers, their ability to pay down their debts is intricately linked to the ability to have and retain a job.

And the tight labor market seems to support their decisions, at least for now. Perhaps the biggest risks would accrue to the financial sector, as it is important to note that consumer loans, which include credit card loans, can be discharged through bankruptcy.

Looking back at all the midterm elections going back to 1950, the incumbent’s administration has lost seats in 16 out of the last 18 midterm elections. However, the study below shows that there is no correlation between GDP growth in the midterm year and the outcome of the election. In fact, only in 12.5% of the occurrences, was the U.S. economy experiencing negative growth when the incumbent party lost seats. 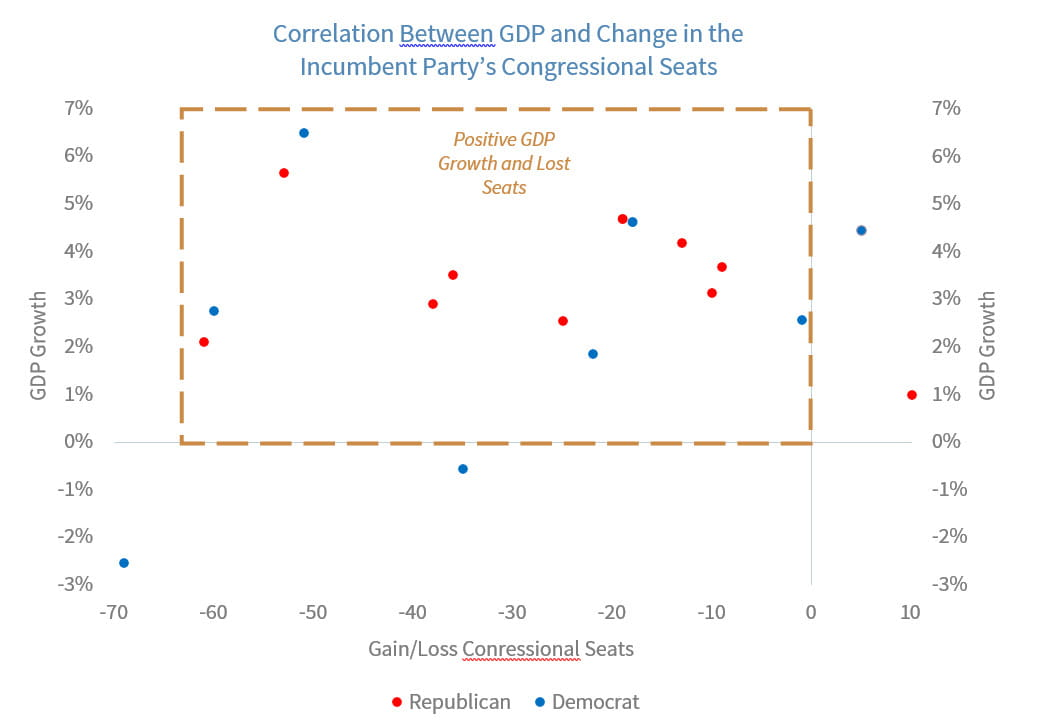 Since 1950, the U.S. has experienced significant economic growth, and it has done so under seven different government compositions. The U.S. economy has experienced its highest GDP growth under a Blue Wave administration (significant Democratic gains or sweep) but also its second worst. However, the two best years (1950 and 2021) were coming out of recessions (1948-1949 and 2020), and the worst year was at the very depth of the Great Recession in 2008. On the other hand, a Red Wave (significant Republican gains or sweep) experienced lower average GDP growth, but also never had negative GDP growth. The recent government composition under President Trump’s administration had the lowest GDP reading in at least 70 years, but that was due to a global pandemic, which the administration had little control over. Conversely, President Biden’s administration reaped the benefits of the post-pandemic reopening.

What is important to know is that, regardless of government position, the U.S. economy has, on average, experienced positive economic growth, as shown by the blue diamonds in the chart below. 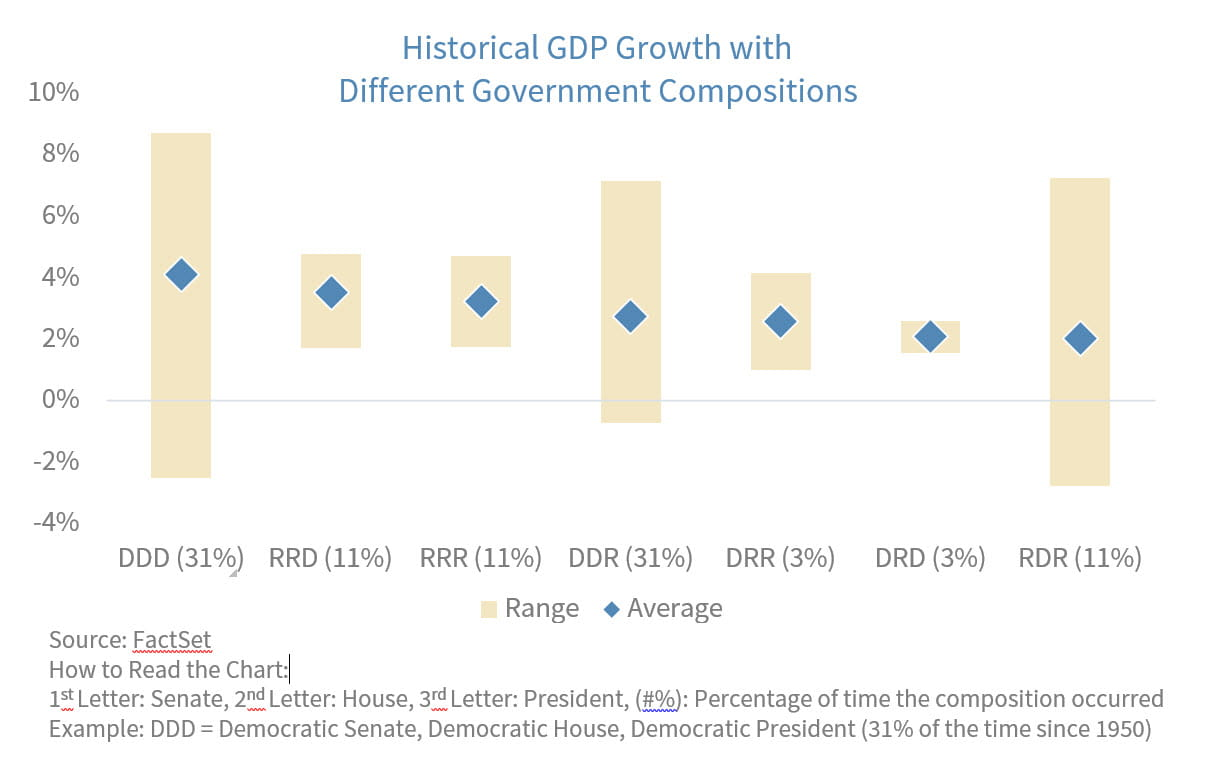 Regardless of which scenario becomes reality, it is very likely the government will be in a state of political stalemate (or gridlock). Since 1950, the U.S. has had a split government for more than half of the time, and during those years it has experienced average GDP growth of 2.7%. However, at any given point in time external factors can cause an economy to expand or contract, and often the administration has little to do with that. The bottom line is that regardless of the outcome of the midterm election, the U.S. economy will still have to face its inflationary issues and will likely enter a recession in 2023.