The market’s reaction to a better-than-expected inflation reading for October should not be a surprise, although the magnitude of the reaction looks a bit exaggerated. In our Weekly Economics of September 23, 2022, just after the September decision by the Federal Reserve (Fed), we said: “the Fed has put its worst-case scenario, something that should be music to the markets’ ears.” We further said: “For the markets, this should be good news even if it is very difficult to see it at this point. Since this is the worst- case scenario for the Fed, any ‘better-than-expected’ news in the inflation front should be a boon for markets.”

But markets should understand that this was just one month of data and that we had better-than-expected numbers before this latest October number and then we saw further deterioration, so markets should be cautious. Although we had very good news from several core goods and services sectors during the month of October, transportation services still managed to increase 0.8% during the month while the all-important shelter component of the index also increased 0.8% after increasing 0.7% in September. Thus, there are sectors of core prices that are still very strong. That is, if we don’t see weakness in the rest of the sectors, as we saw in October, then the probability of higher inflation readings remains. We do know that shelter prices are going to start to weaken in the next several quarters; but, while that train has departed the station, the wagons are going to take a relatively longer time to come through.

Furthermore, the higher oil and gasoline prices story is still not over. According to the latest Energy Information Administration (EIA) estimate, oil prices are expected to remain elevated during the rest of this year and into next year so the Fed is very aware that higher oil prices could, once again, threaten their efforts of bringing down inflation. Thus, the Fed is going to be very careful to keep interest rates high for a longer timeframe in order to buy time for shelter prices to start moving lower and building a buffer against higher oil prices in the future. 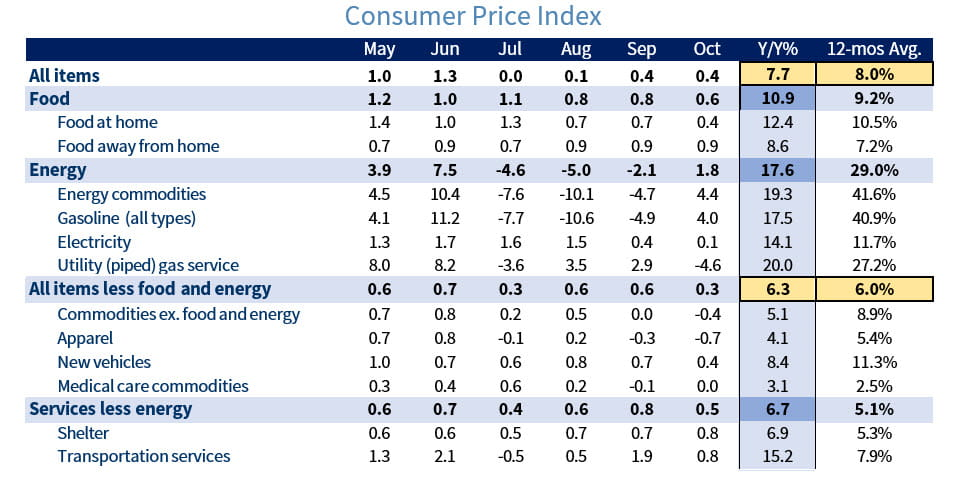 Below, we provide two tables of different scenarios for both, the PCE deflator and the CPI over the next year so we can see how inflation is going to evolve according to these scenarios. Of course, these scenarios assume that inflation will be the same for each month so it is an over simplification. However, it gives an idea of what monthly rates of inflation will allow the Fed to reach the 2.0% target for the PCE deflator. 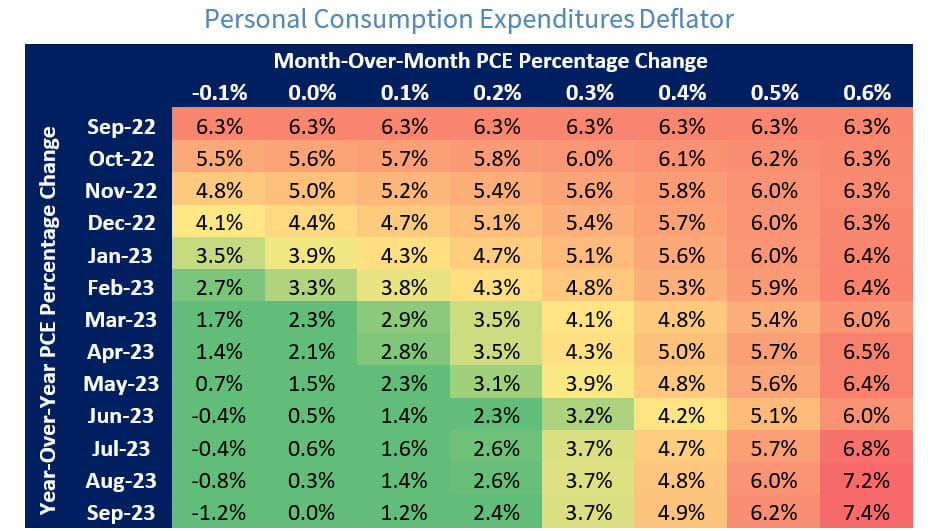 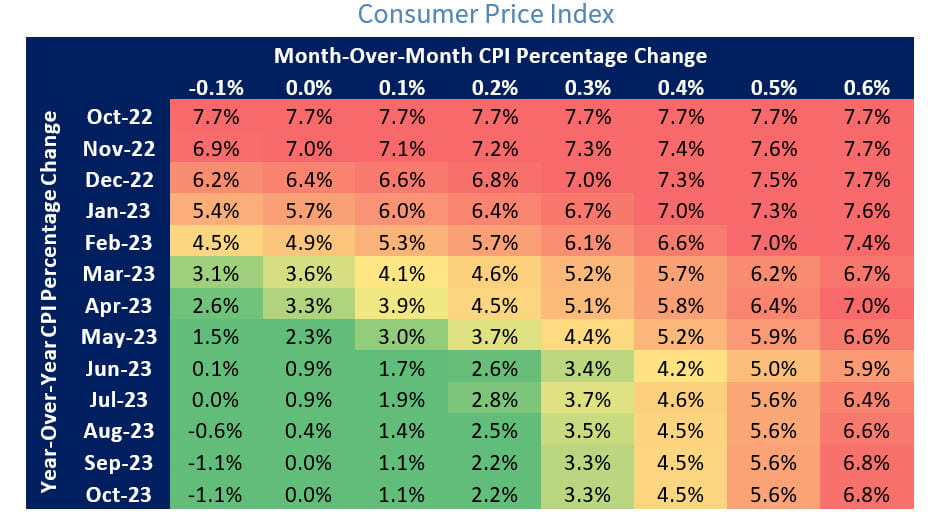 In a very interesting FRBSF (Federal Reserve Bank of San Francisco) Economic Letter entitled “Monetary Policy Stance is Tighter than Federal Funds Rate,” published on November 7, 2022, economists at the regional fed wrote a very insightful report on their view regarding the stance of monetary policy today. They calculated a proxy federal funds rate that includes “forward guidance as well as Quantitative Tightening (QT)” and concluded that “This proxy measure shows that, since late 2021, monetary policy has been substantially tighter than the federal funds rate indicates. Tightening financial conditions are similar to what would be expected if the funds rate had exceeded 5.25% by September 2022.”

Changes to Our Forecast

We have updated our economic forecast for 2023 and we have also extended the forecast to include 2024. The main feature of our new forecast is that we now have the recession starting during the second quarter of 2023 instead of the first quarter and lasting until the last quarter of the year. This change is predicated on the strength of the U.S. labor market and the staying power of the U.S. consumer, which has been able to navigate a higher inflation environment better than expected. However, this strength will weaken going forward.

We now have the U.S. economy flat in 2023 on an annual basis compared to our previous forecast of -0.5% for the year as a whole. Meanwhile, we have the economy growing by only 0.8% in 2023, which is below potential growth as we have inflation coming down but slower than in our previous forecast.