We expect data coming in next week to be very noisy. Early in the week we have building permits, FHFA home price index and the S&P Case Shiller home price index, consumer confidence, durable goods orders, wholesale inventories, pending home sales, new home sales, and then the FOMC meeting, during which the Federal Reserve (Fed) will decide on what to do with interest rates. We believe that the Fed is going to increase the federal funds rate by 75 bps.

But the number that is going to make the most noise is going to be the released on Thursday, July 28. This will be the release of the Q2 GDP growth numbers (first estimate), which many analysts estimate is going to be negative once again. We have GDP in the second quarter at 0.7% annualized but agree that the risk is on the downside.

However, even if the second quarter result comes in negative, the probability that the NBER would call for a recession in the US is very low. The reason for this is that the negative number in Q1 was more of a fluke than a representation of the real state of the US economy during the first quarter. Imports of goods and services were so strong during the first quarter that the growth in imports, which enters GDP with a negative sign, overwhelmed all the other sectors of the economy that had posted growth.

One of the reasons why economic growth in the second quarter is going to be very low, or even negative, is because consumer demand has slowed down considerably compared to the first quarter of the year. And this is good news for the Fed as weaker consumer demand is going to help the Fed start to make progress on the inflation front.

So even if the news on Q2 comes in weaker than what we expect, remember that this number, while important, must be taken with caution and in the new context of an economy that is still on a path to economic normality after the effects that the pandemic has imposed over the US and global economy.

Inflation Vs. Economic Growth in the Euro Zone: There Can Only Be One

On Thursday, July 21, the European Central Bank (ECB) increased rates for the first time in 11 years and ended an eight-year-long period of negative interest rates. Despite raising rates by more than expected (50bps vs. 25bps), the central bank suggested that more hikes are expected as soon as the September meeting. With inflation in June reported at 8.6%, up from 8.1% in May, the ECB is afraid that, similarly to the United States, the long-term inflation expectations will become unanchored and well above its 2% target. While a 50bps hike after over a decade seems a lot, the ECB rate is now 0.00-0.50%, which is still much lower than the US, where the equivalent rate is likely to be 2.25-2.50% by the end of July. Unfortunately, higher interest rates in Europe might not be enough to bring inflation down as the euro zone faces a multitude of headwinds in addition to high inflation.

While the tighter monetary policy will hopefully help reduce inflation, higher borrowing rates will likely have negative repercussions on all European economies. This is particularly true for ‘riskier’ countries, such as Italy, Greece, and Spain, to name a few, as investors will require an even higher premium to hold their debt. Another headwind for the euro zone continues to be high gasoline and natural gas prices, which are unlikely to decline unless the war between Russia and Ukraine is resolved. Additionally, the recent geopolitical turmoil in Italy, Europe’s third-largest economy, is likely to be a drag on the growth of the broader region.

All and all, higher borrowing costs, record-high energy prices, and a weaker euro, which raises the cost of imports, are all factors that ultimately impact consumers’ ability to spend. Therefore, while inflation remains the biggest threat to all economies, the already not-so-bright outlook for the euro zone just got more concerning, as economic growth is likely to slow even further.

Could Somebody Let the US Dollar Know of Its Impending Demise?

I have heard the story of the demise of the US dollar since I have been an economist, or for more than 30 years. However, I also heard of such a story even before life took me through this professional path. So all- in-all, I have been hearing of the dollar demise for more than, let’s say, about 45 years. Yes, I also heard about the dollar demise when I was a kid!! But at that time, I did not know what they were talking about. Today, I am a bit more knowledgeable but a lot more confused of what those stories are talking about, or as a good friend of mine would say, “I am still confused, but at a higher level!” 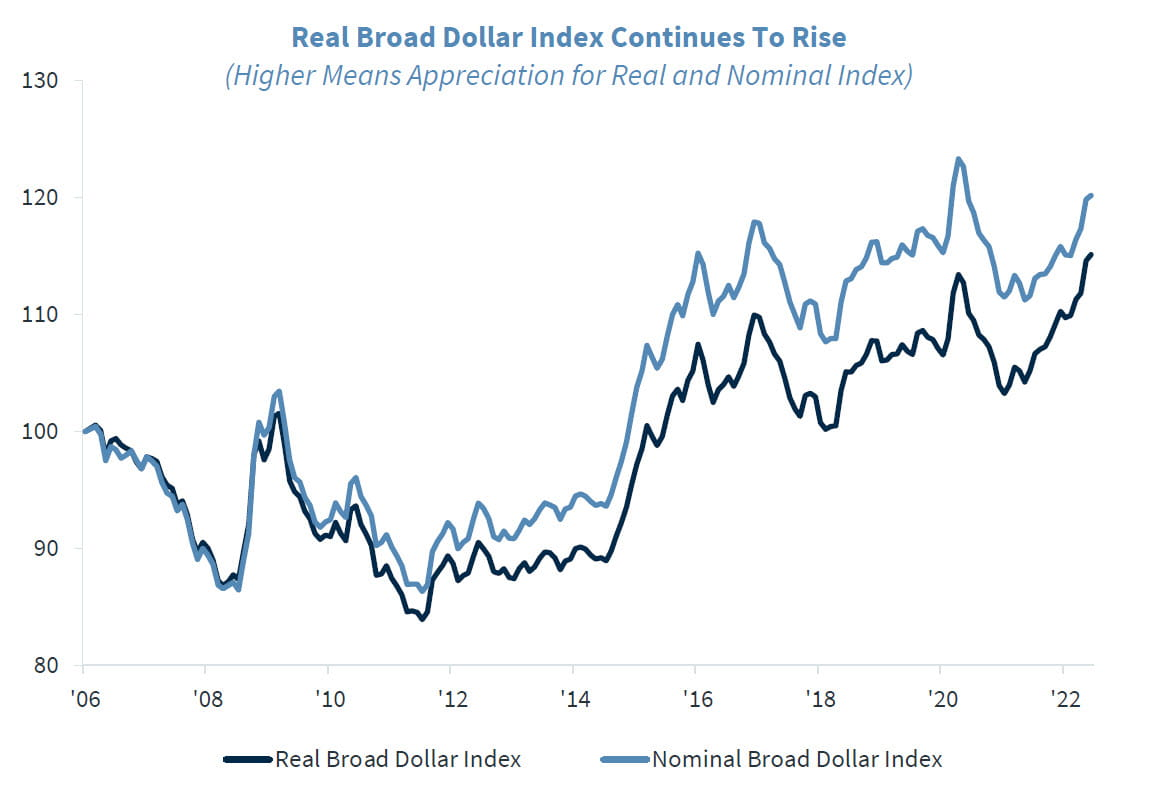 Again, the US dollar is the currency imposed on US citizens transacting within the borders of the US, but it is the currency of choice for everybody else in the world who is serious and intends protect their hard- earned incomes. There is nothing compared to the US dollar, and that has notable benefits, for those who hoard US dollars around the world as well as for the US economy. The US seems to be saying: “we will protect the value of the US dollar, and the rest of the world is saying, we will keep the dollar as our currency of choice.”

I remember that back in the mid-1990s the US Treasury did an ad campaign in Argentina on the redesign of the $100 dollar bill. The campaign ads said something like this: “We are changing the look of the US $100 dollar bill, but Argentines should not be worried about this, as their current bills will remain legal tender.” The question at the time was: why would the US Treasury spend money for an ad campaign in Argentina? The answer is that Argentinians were holding a lot of US dollar notes (i.e., typically $100 US dollar bills) under the mattress and/or in safe deposit boxes at Argentina’s banks. In fact, very large financial transactions in that country, like the buying and selling of a home, are conducted in US dollars rather than using the Argentine peso and a large majority of real estate ads for selling a home are posted in US dollars rather than in Argentina’s pesos.

That is, Argentinians have more trust in the US Treasury and the US Federal Reserve than in their own country’s institutions and thus, Argentinians prefer to hold US dollars rather than the country’s currency, especially for large transactions. (By the way, Russians are also large hoarders of US dollars.)

Argentines are not alone in feeling this way. Most US dollar notes are held outside of the US and the fact that everybody in the rest of the world is willing to keep US dollars under their mattress and/or in safe places, like safe deposit boxes, means that the US gets a ‘free’ pass when it is time to finance its excesses. The holdings of US dollars by foreigners outside of the US is an interest free loan. That is, the more US dollar notes foreigners hold outside of US borders the cheaper it is for Americans to finance the current account deficit as foreign savings continue to pour in from outside.

The question that US dollar fear mongers should ask themselves and all of those that follow them is: would your followers be willing to put their money where their mouth is? That is, would any of those predicting the US dollar demise be willing to hold Chinese yuan, or Russian rubbles, or Argentine pesos (I know, I am exaggerating here!!) under their mattresses for 20 years in the hope that those currencies are worth more in the future than what they are worth today, or even that they are worth the same as they are worth today? I don’t think so!

The recent appreciation of the US dollar should not surprise anybody. The Fed’s late start out of the gate to contain rising prices has reinforced the importance of keeping inflation under control and has catapulted the US dollar again into a race to the top. The stronger the Fed’s message and actions regarding its commitment to bringing down inflation, the stronger the US dollar will remain against other currencies around the world.