On Monday afternoon, the U.S. Treasury is expected to announce a June budget shortfall of about $863 billion, bringing the 12-month total to nearly $3 trillion (or about 14% of pre-pandemic GDP). The red ink will continue. Lawmakers are expected to approve another round of federal stimulus later this month. None of that is worth losing sleep over. The government has no problem borrowing and the cost of servicing its debt is expected to remain low. True, we were on unsustainable path ahead of the pandemic. The national debt had breached $1 trillion (12-month trailing) and was rising faster than nominal GDP growth. The danger is not doing enough to support the economy now or tightening the budget too soon, dampening the recovery. While investors focus on the federal budget, state and local governments may be more important.

The steep decline in economic activity this spring has been met with swift and massive fiscal policy support. Recall that the $831 billion support in the American Recovery and Reinvestment Act of 2009 (ARRA) began to arrive about 16 months into the recession and was mostly spread out over two years. The current fiscal support is much larger and has arrived a lot sooner – and has helped to shore up the recovery.

With fiscal policy, there are two key questions in a downturn. How large should the support be, and how long should it last? The House has passed an additional $2 trillion stimulus, but this is more of a wish list, dead on arrival in the Senate. Having guidelines for further spending, such as the level of unemployment, makes sense, but that principle has been rejected by the Senate. Many laid-off workers have returned to their jobs as state economies have re-opened, but some have exhausted their regular state benefits and are moving into pandemic assistance, while others have been laid off only recently. Many temporary layoffs become permanent, but prolonged economic weakness will lead to job losses in areas beyond those that were directly affected by the lockdown. Assistance has been generous, with some workers getting more than when they were working. With some parts of the economy unlikely to return to pre-pandemic levels for many months, workers will eventually have to transition to other industries, often with difficulty. Ongoing support for laid-off workers will be critical.

State and local governments generally have balanced budget requirements. In a downturn, tax revenues dry up, straining budgets. Job cuts and service reductions follow. A third of ARRA was aid to the states. Even with that support, government job cuts were significant, dampening the pace of the economic recovery. It was only last year that state and local government jobs recovered from the losses following the financial crisis. State and local government employment is roughly six to seven times the number of federal government jobs. More than 1.5 million of these jobs were lost from February to May, with only a modest increase in June. About two-thirds of these lost jobs were in education, but as we saw during the aftermath of the financial crisis, cuts in police, fire, and other important services are likely in the months ahead. In turn, the pace of recovery is likely to be slower than it would be otherwise.

The New York Fed’s Weekly Economic Index rose to -6.83% for the week of July 4, up from -7.66% in the previous week and a low of -11.48% at the end of April. The WEI is scaled to four-quarter GDP growth (for example, if the WEI reads -2% and the current level of the WEI persists for an entire quarter, we would expect, on average, GDP that quarter to be 2% lower than a year previously). 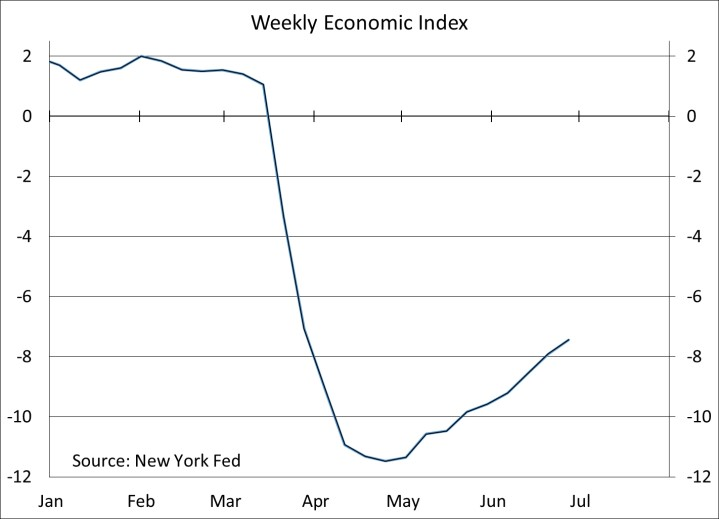 The University of Michigan’s Consumer Sentiment Index rose to 78.1 in the full-month assessment for June (the survey covered May 27 to June 22), up from 72.3 in May. Expectations remained weak. The report noted that “While most consumers believe that economic conditions could hardly worsen from the recent shutdown of the national economy, prospective growth in the economy is more closely tied to progress against the coronavirus.”

The opinions offered by Dr. Brown should be considered a part of your overall decision-making process. For more information about this report – to discuss how this outlook may affect your personal situation and/or to learn how this insight may be incorporated into your investment strategy – please contact your financial advisor or use the convenient Office Locator to find our office(s) nearest you today.

All expressions of opinion reflect the judgment of the Research Department of Raymond James & Associates (RJA) at this date and are subject to change. Information has been obtained from sources considered reliable, but we do not guarantee that the foregoing report is accurate or complete. Other departments of RJA may have information which is not available to the Research Department about companies mentioned in this report. RJA or its affiliates may execute transactions in the securities mentioned in this report which may not be consistent with the report's conclusions. RJA may perform investment banking or other services for, or solicit investment banking business from, any company mentioned in this report. For institutional clients of the European Economic Area (EEA): This document (and any attachments or exhibits hereto) is intended only for EEA Institutional Clients or others to whom it may lawfully be submitted. There is no assurance that any of the trends mentioned will continue in the future. Past performance is not indicative of future results.