The Fed is hesitant to let up on inflation after its "transitory" misstep, said Larry Adam, chief investment officer at Raymond James.

As we approach the unofficial end of the summer with the upcoming Labor Day holiday, financial markets are laboring after the recent bounce back in equities. However, we continue to stress three dynamics when it comes to investing: perspective, patience and probing beyond the headlines. With regard to perspective, investors had been enjoying a strong summer rally, with the S&P 500 set for its strongest two-month period (+15.3%) since August 2020 – a return that would fall in the 99th percentile over the last 20 years. But recent downside volatility, with the S&P 500 trading 6.4% lower over the last nine days, was not unexpected as the index’s rapid rally took it above our year-end target of 4,180 and the market was in need of a digestive period. Patience is a virtue and neither the Fed, the economy, nor financial markets can adapt as quickly as investors would like. It takes time to unwind from the pandemic and war-induced drivers of inflation over the last two years! And third, and most important, investors need to probe beyond the headlines to understand the true underlying fundamentals.

One print doesn't make a pattern

Many economists and financial market pundits deemed the Fed’s use of the word "transitory" as the "worst call in the history of the Federal Reserve." While the definition can be debated (e.g., how long is transitory?) and other factors such as the Russia/Ukraine war put undue pressure on energy and agricultural inflation, the result is that elevated inflationary pressures have lasted longer than the Fed originally expected. Therefore, Chairman Powell’s rhetoric at the Jackson Hole Symposium on August 26 may be a reflection of the committee being “once bitten, twice shy.” In other words, psychologically, the Fed and Chair Powell do not want to make a second incorrect call and jeopardize their credibility. As a result, to exude confidence and control of the inflation and policy narrative, it is understandable that Chairman Powell would not declare premature victory over inflation and reaffirmed that interest rates would remain higher for longer until a sustainable, consistent streak (e.g., more than the one-month improvement we have seen in official inflation data) of easing pricing pressures was realized.

In our view, that pattern could well develop this fall and lead the Fed to eventually become less aggressive about raising rates as we go into 2023. Another aspect that frustrated the Fed was the fact that with the tightening cycle not even completed yet, the futures market was reflecting 50 basis points of interest rate cuts in 2023. But Chairman Powell’s latest commentary reined in these expectations, as the market’s prospects of cutting interest rates next year was erased. To be clear, the good news is that we are seeing the early signs that inflation is beginning to moderate, as gasoline is down over $1 per gallon from its recent peak and both the Consumer Price Index and the Producer Price Index declined on a monthly basis for the first time since mid-2020 in July. Our expectation remains that the Fed will raise interest rates 50 basis points at the September FOMC meeting (September 20-21), which from a historical perspective, is still aggressive. In fact, out of the 61 rate hikes dating back to 1985, only 20% of them have been of this magnitude or greater (only 12% have been 0.75% or greater). The economy still has to digest all the interest rate hikes this year as monetary policy acts with a lag of six to nine months. As a result, our economist reiterates his base case expectation of the fed funds rate peaking at 3.5% this year and remaining on hold throughout 2023.

The recent equity weakness is driven by more than the U.S. economy, as other parts of the global economy have been on the brink of recession for months. More specifically, recessionary risks have been plaguing Europe, as elevated energy prices are prolonging the peak in inflation (e.g., the U.S. is past its inflation peak and Europe is on the way to its peak), the weakening of the euro has compounded the reduction in purchasing power (especially for commodities priced in dollars such as oil), and the European Central Bank (ECB) is poised to raise interest rates into a visibly weakening economy. With double-digit inflation in nearly half of the EU countries, the ECB halted its bond buying program, launched a crisis tool to counter rapidly rising interest rates and widening sovereign spreads, and lifted interest rates by 50 basis points last month – its first rate hike in over a decade. Given that this move brought the target rate to 0%, the ECB is forecast to raise rates by a similar magnitude at its next meeting (September 8). Tightening monetary policy in a weakening economic scenario is a recipe that could, as central bankers around the world have argued, result in “some pain” and “sacrifice” on behalf of consumers and businesses. It’s worth noting that the ECB’s decision to increase rates will be preceded by the Bank of Canada (September 7) and followed by the Bank of England (September 15) and Federal Reserve (September 21). The coordinated tightening by more than 80 central banks this year has continually weighed on economies and the potential negative ramifications have kept investors on edge.

From micro to macro

The 2Q22 earnings season was under the microscope, as investors not only wanted to see the strength of corporate earnings but also needed to hear forward-looking commentary from CEOs about the status of the economy and their businesses. Why? To get more insights into the "boots on the ground" status of the economy. The results? Robust 2Q earnings were not consistent with the recessionary conditions that headlines were insinuating and corporate guidance was much better than feared—at least not recessionary in the near term. And while 2Q earnings growth of 7% was not nearly as impressive as the double-digit quarters we saw through 2021, healthy sales revenues and margins highlighted the effectiveness of corporate America. In addition, contrary to expectations, there was evidence of resilient consumer spending patterns and healthy levels of credit usage despite pricing pressures. This better-than-expected outcome helped the S&P 500 rally 14% from the unofficial start (e.g., big banks reporting) through the unofficial end (e.g., the big box retailers) of the reporting season—the best performance during the earnings season since 1Q97. Now, with earnings results no longer the focus, the equity market is transitioning its attention from the micro (e.g., earnings releases) to the macro (e.g., jobs, inflation, growth, etc.). With recessionary concerns and fears of too much tightening remaining consequential risks, the upcoming Consumer Confidence (August 30), ISM Manufacturing (September 1), employment (September 2), and CPI (September 13) reports could lead to some interim volatility.

While we place more emphasis on the fundamentals, it is worth noting that the August through September time period has historically been the weakest two-month time period for the equity market. In fact, the S&P 500 has declined ~0.5% on average since 1950 while all other rolling two-month returns are positive. What doesn’t help is that trading volumes are historically depressed during this vacation-laden period so any moves are exacerbated. In addition, midterm election years like the one we are in now have historically compounded the pressure on the markets prior to the election. The good news is that from a historical perspective, both seasonal patterns tend to reverse themselves in the form of a post-midterm election and year-end rally (e.g., November/December). Let’s hope that these patterns repeat themselves this year – especially if inflationary pressures recede as we expect. 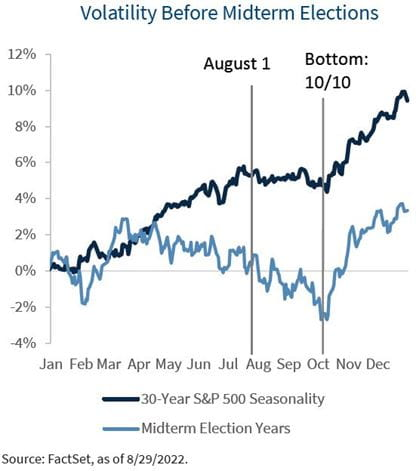 The equity market notched an impressive rally after the major indices entered bear market territory, but investors may have gotten ahead of themselves as the S&P 500 soared above our 2022 year-end target of 4,180. Moving forward, positive earnings growth, decelerating inflation, the conclusion of the midterm elections, and positive seasonal factors should help support equity prices by year end. As a result, if weakness in the equity market were to persist, long-term investors could look for buying opportunities should the S&P 500 fall below the 4,000 level. Assuming long-term interest rates are at or near a peak, valuations for equities remain attractive at current levels.

The S&P 500 is widely regarded as the best single gauge of large-cap U.S. equities. There is over USD 7.8 trillion benchmarked to the index, with index assets comprising approximately USD 2.2 trillion of this total. The index includes 500 leading companies and captures approximately 80% coverage of available market capitalization.