This is a question that economists are asked every time there is market turbulence. My instinctive answer is that the stock market is not the economy, which is also an easy answer to give, considering that markets are more forward looking than economists’ data points. But it is also true that markets have been wrong before and are prone to overreact to news that may or may not have consequences for economic activity.

There are three primary scenarios that could unfold:

The Fed engineers a soft landing (35%): while this is very challenging, the Federal Reserve (Fed) could potentially still be able to bring down inflation without sending the economy into a recession. This scenario assumes that inflation will come down over the next few months and the Fed won’t be forced to continue to hike as fast and as much as they have suggested.

The Fed does not engineer a soft landing, and we experience a severe recession (5%): while we don’t expect this will be the case, there are a lot of variables that are out of the Fed’s control such as the Russia/Ukraine war, consumer sentiment, etc. Therefore, if a more severe recession were to occur the S&P 500 could experience deeper losses.

However, the key remains that the stock market is not the economy. In fact, the equity market is a forward- looking mechanism, and equities have historically bottomed ~four months prior to the end of a recession. Therefore, equities historically have not ‘waited’ until the economy recovered to recoup their losses. 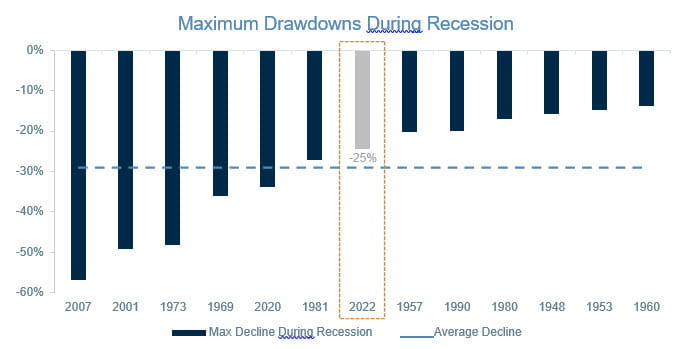 We think that the Fed ‘s recent change in tone regarding the seriousness of inflation and the assertiveness of its message changing the path for the “appropriate path for monetary policy” was major news for the ‘real’ economy. The reason for this is that the previous path was relatively benign for economic activity while the new one, if followed, will probably do more damage to the economy than the previous path.

Let’s look at the sector that was already affected before this change took place, the housing market. The first 25 basis point increase to the federal funds rate early this year had an outsize effect on mortgage interest rates. Mortgage rates increased a full percentage point between mid-January of 2022 and mid- March 2022. After that, mortgage rates have continued to increase as the yield on the 10-year Treasury has continued to move higher. 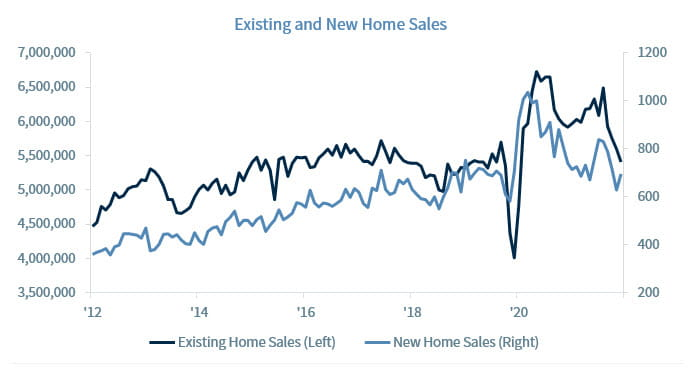 Thus, the housing slowdown is well on its way, and it will contribute to put downward pressure on house price inflation during the next several quarters. So far, signs of housing weakness have appeared in the market for homes $250,000 in price and lower, while some cracks are also appearing in regional markets for homes priced $250,000 to $500,000.

However, we want to be clear that we are not looking at a collapse of the housing market as we saw back in 2008 during the Great Recession when the housing bubble imploded and triggered a financial crisis that spanned across the globe. What we are expecting is a slowdown in the housing market as segments of the population are priced out of the market due to the increase in home prices as well as the increase in mortgage rates.

Remember what the NBER, the official source for calling recessions, says about a recession: “The NBER's traditional definition of a recession is that it is a significant decline in economic activity that is spread across the economy and that lasts more than a few months. The committee's view is that while each of the three criteria—depth, diffusion, and duration—needs to be met individually to some degree, extreme conditions revealed by one criterion may partially offset weaker indications from another.”

That is, for a recession to be called we need to see weakness across the overall economy. In the case of employment, it needs to weaken considerably across the overall economy. From the employment side, however, anecdotal evidence is not a good indicator of how the overall employment sector is doing. If we hear this and that company is laying off workers it is very difficult to infer that, on net, US firms are laying off workers. We saw in May that the retail sector shed 60,700 jobs but other sectors of the economy more than offset that monthly decline. That is, the retail sector was weak, but the rest of the sectors were not.

Furthermore, one of the most coincident indicators of the health of the labor market is the initial jobless claims number, which comes in every week. This number has remained close to all time lows and although it has trended higher over the last several months, it is not signaling any problems for the US labor market yet. At the same time, the JOLTS, that is, the Job Openings and Labor Turnover Survey number, is still very strong, pointing to the existence of almost two jobs available for every worker looking for a job. 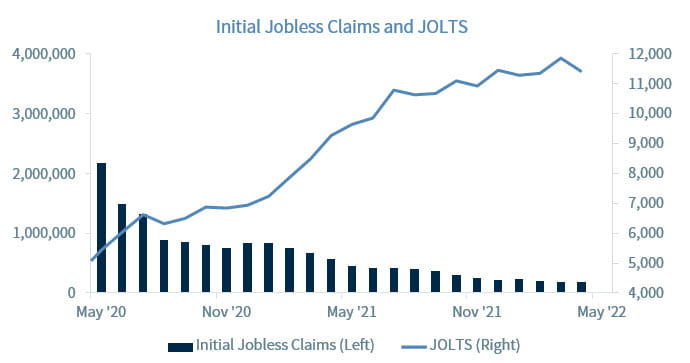